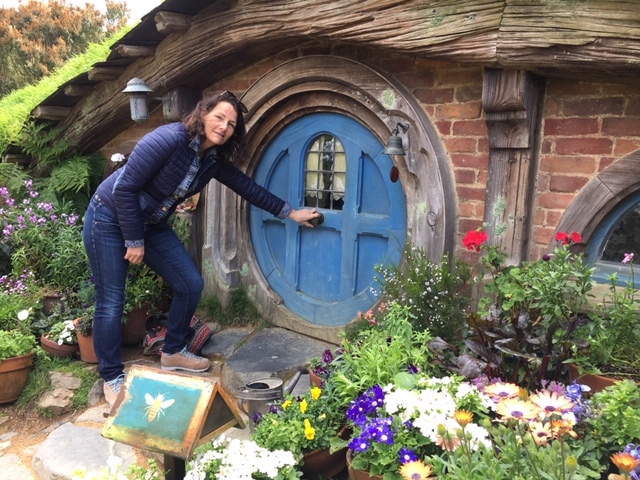 HOBBITON – A TRIP TO MIDDLE-EARTH

An unexpected cancellation meant that Ernst and I could set off on the 2 ½ hour journey to visit the Hobbiton Movie Set, just outside of Matamata. We have had many guests who have either just been or are on their way to visit Hobbiton, so we thought it was about time we went ourselves.

We arrived a little early and were lucky enough to have been able to take a tour with Luke, an experienced and very passionate guide – with just 11 of us it was like a private tour. A short bus ride through Alexander’s beautiful sheep farm took us to the start of the tour, where Luke gave us the mandatory safety talk, then we headed up the path and got our first view of Hobbiton.

Magical! Majestical, even! We fell in love with the place. Luke took us through the Shire, pointing out the various places where scenes were filmed, explaining to us how some images where shot and emphazising the difficulties of filming dwarves and giants in the same shot!

We were very impressed with the attention to detail, the little touches, like flowerpots outside the Hobbit caves, miniature woodworking tools, a working garden, miniature ladders up into the fruit trees – too many things to list. It was as though the Hobbits had just stepped out.

The two hours just flew by. We learnt so much about the incredible amount of effort that has gone into making Hobbiton. It was obvious that Peter Jackson revered Tolkein’s incredible story and wanted to do it justice. No half measures, with no expense spared to bring Tolkein’s vision to life.

The tour ended with a complimentary beverage in the Green Dragon Inn, where we had time to reflect on what we had just experienced, and to imagine ourselves as Hobbits for a little while. We went as sceptics – after all, this is all make-believe – and came away as fans! Realizing that everyone just loves a good story!